Americans fell in love with trading stocks during the pandemic, pouring billions of dollars into a market that only ever seemed to go up. Now with the Federal Reserve set to start hiking interest rates, experts say making money buying and selling shares is about to get a lot harder. Many novice traders will never know what hit them.

In the past few years, investing has become something of a national hobby. Once the province of Wall Street traders, or at least well-heeled professionals with 401(k)s, apps like Robinhood helped stock trading capture the public’s imagination. Before long, students started sharing their trading tips between classes and people couldn’t stop talking about cryptocurrency, even on dating apps.

Some estimates say the retail crowd’s share of the overall market more than doubled in 2020, and the numbers kept climbing from there. Fidelity Investments had 31 million total retail accounts in the third quarter of 2021, up nearly 23% from the same time the year earlier.

But the investing boom can’t go on forever. And Federal Reserve Chair Jerome Powell has indicated that the central bank will raise interest rates, possibly as soon as March. The move, designed to curtail the amount of money coursing through the economy, could mean fewer dollars chasing the kind of speculative assets that have seen huge price increases in recent years, such as tech stocks and cryptocurrencies.

“Many new investors will be in for a rude awakening,” says James Angel, a finance professor at Georgetown University. “The stock market is not a one-way upward escalator.”

It felt almost effortless to make money on risky investments like meme stocks, cryptocurrency and the high-flying tech sector in recent years. But now that easy money is behind us, newer investors will face a challenge: Can they be patient, and turn their fast-moving hobby into a way to build long-term wealth?

Feeling less confident about managing your own investments?

Learn more about personal financial advisor services like SmartAsset available in your location.

America’s investing obsession started even before the pandemic, kicked off by a financial innovation: zero-commission stock trades. Popularized by the investing app Robinhood, in 2019 brand-name brokerages like Fidelity and Charles Schwab jumped on the bandwagon, helping to bring trading individual stocks into the mainstream.

Then, the pandemic hit. Confined to their homes during lockdowns, Americans were looking for a new hobby, from high schoolers trying to replace after-school activities to sports gamblers hoping to fill a void. People with little or no experience with investing took to social media to learn how to get in on the action. Many of them had extra cash in the form of stimulus checks from the government: Nearly half of respondents to a Betterment survey say they invested some of their stimulus money.

There was a lot for these new investors to get excited about. Trendy companies like Airbnb, Robinhood and Coinbase garnered massive attention throughout the pandemic for their debuts on the public market and SPACs became all the rage on Wall Street. Popular tech stocks saw their stock prices skyrocket, with cult stock Tesla surging from around $100 per share in January of 2020 to a high above $1,200 in November of 2021. Meanwhile, cryptocurrency prices kept hitting new records.

In January 2021, Wall Street and Main Street alike couldn’t stop talking about how everyday investors on Reddit started a bull case for GameStop, pushing the video game retailer’s stock price from around $20 at the end of 2020 to more than $300 at the end of the first month of 2021. Soon after, other familiar-but-struggling companies like Hertz and AMC garnered attention as well.

“Last year was a year where risk-taking was rewarded,” says Jack Ablin, chief investment officer and founding partner at Cresset Capital. “The farther out you went on a limb, the better your investment results were.”

But now, he says, we’re seeing a reversal of that.

Offer valid for U.S. residents 18+ and subject to account approval. There may be other fees associated with trading. See Public.com/disclosures/.

Some investors may get burned

The stock rally had to end some time, and there are already signs the music is beginning to stop. During the final three months of 2021, Robinhood’s active monthly users dropped to 17.3 million from 18.9 million in the quarter before. And financial markets have had it rough in 2022, with the S&P 500 posting its worst month in January since the start of the pandemic and Bitcoin’s price plunging as much as 50% from its November high. Plus, we’re saying goodbye to stimulus checks and hello to an expected interest rate hike.

A big reason meme stocks, tech stocks and cryptocurrencies were able to do so well for so long was the Federal Reserve’s commitment to stimulating economic activity by keeping interest rates close to zero, Matthew Tuttle, chief executive at Tuttle Capital Management, recently told Money. Now, Wall Street has to reprice all those assets, and that “gets really ugly,” he added.

For the Federal Reserve, hiking short-term interest rates is a key tool for fighting inflation. Higher interest rates constrain both businesses and consumers ability to borrow — and spend. This constrained spending helps bring spiraling prices for goods like food and cars under control, but it also tends to crimp prices for financial assets, real estate, stocks and cryptocurrency.

When assets are in the midst of a speculative frenzy — as cryptocurrencies and some tech stocks arguably are today — an interest rate hike can prove the pin that pops the balloon. That’s essentially what happened during the first dot-com bubble in the 1990s. After the stock market posted some of its best-ever years in the latter half of the decade, the Fed began hiking rates in the middle of 1999. By 2001, the tech bubble had burst and stocks plummeted into a bear market. The tech-heavy Nasdaq didn’t fully recover for 15 years.

In other words: “The Fed is embarking on a hiking cycle into an overvalued market,” as strategists at Bank of America wrote in a recent research note. “This ended poorly in the other instance we saw this, 1999.”

Online Financial Advisors can guide you toward smart investments and sound economic planning.

We can all benefit from the help of experts, especially when it comes to finances. Reach out to an Online Financial Advisor by clicking below.

‘It really changed my focus’

When speculative investments no longer seem to automatically generate profits, some new investors are likely to react by doubling down. In that case, they could get caught in a dangerous cycle, not unlike the problem gamblers have trying to dig themselves out of a hole. You need not look far on Twitter to see many already bemoaning their meme stock losses.

“They’re excited by the speculative aspect of it, and they’re going to look for a bigger and bigger hit of that dopamine,” Spencer Jakab, author of the new book “The Revolution That Wasn’t: GameStop, Reddit, and the Fleecing of Small Investors,” said in a recent interview with Money.

The good news, however, is that for others — even if they don’t get rich quick — the stock trading craze may turn out to be an introduction to longer-term investing, with a focus on traditional precepts like value and diversification.

Timothy Stroud always wanted to start investing, but he didn’t actually get started until the meme stock craze caught his eye last summer. Stroud, a 28-year-old freelance video editor and retail worker who lives in Houston, Texas, first heard about GameStop and AMC’s price surge from his coworkers, and decided to invest just $1 in AMC out of curiosity.

Less than a year later, he’s gone from that one small purchase and knowing close to nothing about investing to a portfolio of around 50 stocks and a ton more knowledge. Stroud invests with Public.com and says the online community and offline community of his friends who are also interested in investing has helped him learn about exchange-traded funds, dollar-cost averaging and more. Watching others react to market moves helped him realize the importance of long-term investing, he adds.

Stroud isn’t the only young investor who is now more interested in investing for the future than in gaining a quick buck. The number of individual retirement accounts among Gen Z investors grew 146% at Fidelity in the last year.

To celebrate our 50th anniversary, we’ve combed through decades of our print magazines to find hidden gems, fascinating stories and vintage personal finance tips that have withstood the test of time. Dive into the archives with us.

This article originally appeared on Money.com and may contain affiliate links for which Money receives compensation. Opinions expressed in this article are the author’s alone, not those of a third-party entity, and have not been reviewed, approved, or otherwise endorsed. Offers may be subject to change without notice. For more information, read Money’s full disclaimer.

Get the latest local business news delivered FREE to your inbox weekly.

Thu Feb 24 , 2022
Central bank jitters and intensifying geopolitical tensions have pummeled fairness marketplaces in new months and sent the S&P 500 into correction territory Tuesday for the to start with time in two yrs. But irrespective of a turbulent get started to 2022, sturdy earnings momentum stays a tailwind for shares. The […] 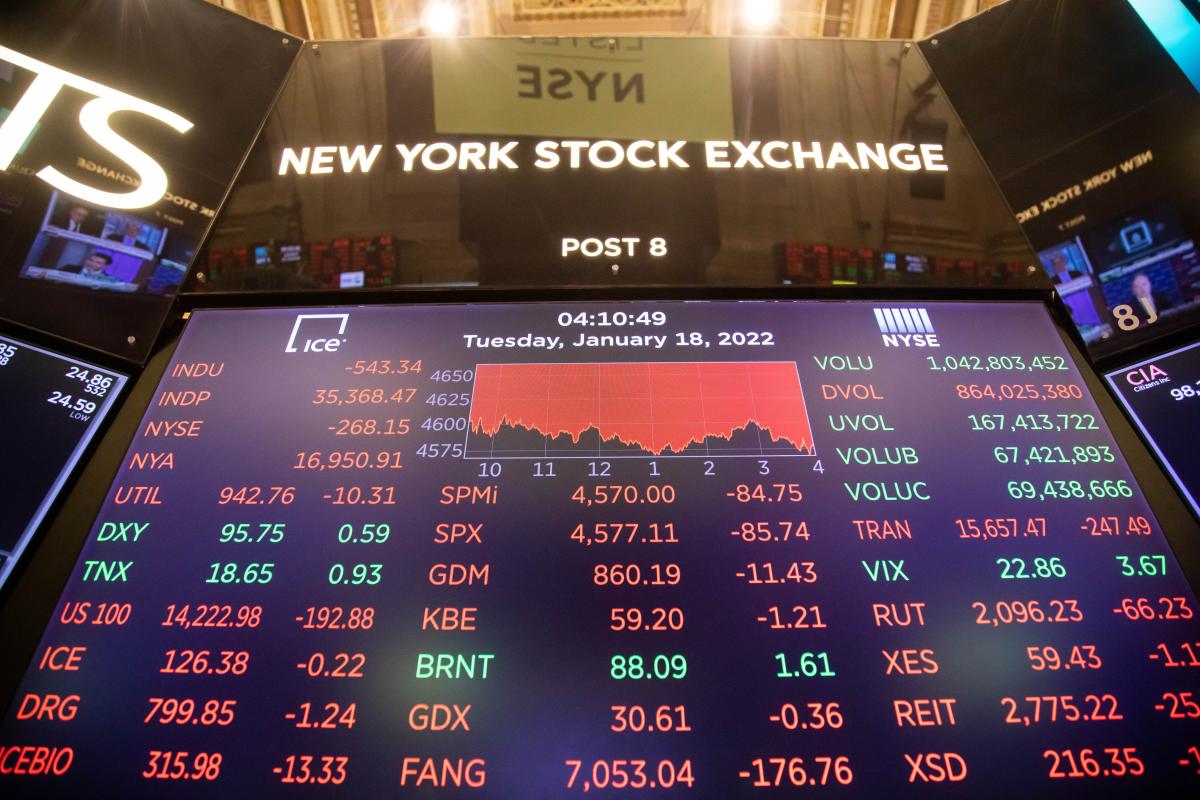