The vice chairman of the El Paso County GOP, Karl Schneider, filed a campaign finance complaint form with the Colorado Secretary of State’s Office today, according to documents available on TRACER, a campaign finance disclosure website.

Schneider’s complaint involves donations from the El Paso County GOP’s Aug. 6 Lincoln Day Dinner, which featured Georgia Rep. Marjorie Taylor Greene. According to Schneider’s complaint, “Donations to the Party for the Lincoln Day Dinner were not found,” he wrote. “The [Treasurer] later resigned in part, due to the fact he requested, as did I on 8 October 2021, that we hire an outside accountant and conduct a full audit to help sort this matter out. The Chair [Vickie Tonkins] has refused to provide this support and refused to communicate with myself on the matter and other members of the Executive Committee of the El Paso County GOP which has a fiduciary responsibility w/regard to all financial matters. I am very concerned that the Party has violated and is violating the Fair Campaign Practices Act and, given our current bylaws structure, we are unable to compel compliance of the Act by our Chair. It is the intent of this complaint to report suspected campaign finance law violations and ultimately achieve transparency in our Party financial dealings by requesting the Secretary of the State of Colorado investigate these allegations of campaign finance law violations.”

Attached to the complaint was an Oct. 1 email from former El Paso County GOP Treasurer John Pitchford to the executive committee — Schneider, Chairwoman Vickie Tonkins, Secretary Sheryl Glasgow and Colorado Republican Committee Chairwoman Kristi Burton Brown — bringing attention to the discrepancies. “We need a full inventory of all Lincoln [Day] items sold and unsold,” wrote Pitchford. “I am unable to do any further Tracer reporting until we have accurate records from Aug 6. Jeanine Nelms was the winning bidder for two items. I wanted to get her address so I could enter her data into Tracer. She told me she came to the office to pay for her coffee – NO coffee. She wanted to pay for her necklace – NO necklace. I suggest we hire an accountant to figure this out.”

Also included was an Oct. 8 email between Schneider and Mary Elizabeth Fabian, who ran for the District 5 City Council seat in 2021. Schneider wrote, “Please reach out to John [Pitchford]. I recall he suggested an outside consultant/accountant be hired to help him clear up donation accountability problems as of a week ago. I think there were at least two items, possibly very high dollar value (jewelry), missing and some tracer challenges. There may be other issues but not sure. I do agree with our Treasurer that if he needs additional resources, he should get it.”

Schneider also addressed Tonkins, who was copied on the Fabian exchange, requesting an audit be conducted for all tickets and items related to the Lincoln Day Dinner; that a police report be filed if the missing items were over $50 in value; and a Special Executive Committee session be called to address the issues.

An undated message from the El Paso County GOP Executive Committee to Brown was also included in the complaint. Burton Brown wrote, “On Oct. 12, Dr. John Pitchford resigned from his position as Treasurer of the El Paso County Republican Central Committee…. He did this when his request to hire an accountant to investigate discrepancies with the Lincoln Day Dinner was denied by the County Party Chairwoman, Vickie Tonkins…. His resignation was to become effective on October 21 so that he could stay on to train a replacement. Ms. Tonkins informed him she was not giving him the training time that he requested. To her, his resignation was effective immediately and he was to turn in the books and any party related items in his possession…. Based on John Pitchford’s concern, Vice Chair Karl Schneider, also requested a full audit from Ms. Tonkins…. To date, she has refused to respond to his request. Our county bylaws are clear, the Executive Committee has a fiduciary responsibility for the finances of the Central Committee. As such, we, members of the Executive Committee, are concerned there could be discrepancies in the Lincoln Day Dinner records/accounts. We know this was a very successful dinner. It was attended by over 400 people with many auction items, and allegedly grossed approximately $50,000. All receipts should be properly accounted for.”

Tonkins did not immediately respond to the Indy‘s request for comment. Schneider’s complaint is not the first accusation of discrepancies in regards to the El Paso County GOP’s finances. According to a Sept. 4 email sent by Pitchford to members of the Fountain City Council, obtained via a Colorado Open Records Act request, Pitchford accused newly elected Fountain Mayor Sharon Thompson and Colorado Rep. Mary Bradfield (R-HD21) of filing a false report. “In 2019 I became treasurer of the El Paso County GOP and in that capacity, I reviewed our Tracer reports and found one of them to be in my opinion fraudulent,” wrote Pitchford. “I’ve attached this report and it will allow you to do the math so that you can determine for yourself that this particular report is fraudulent on its face. Our CPA put it this way, ‘it just doesn’t add up.’ I began asking questions as to why this report was falsified and who had knowledge of it. I wanted to know why no effort was made to determine why this report was in error by nearly $44,000 and why no efforts were made to correct it before filing it with the Secretary of State. Sharon Thompson had knowledge of this document and assisted state representative Mary Bradfield in preparing it.”

Thompson, who served as the Republican House District 21 chairwoman since 2012, denied involvement with the TRACER report in question. “I had nothing to do with the books,” she said in a Sept. 12 phone interview. “I’ve never prepared a TRACER Report.”

Thu Nov 25 , 2021
For former NFL player Adewale Ogunleye, seeing anyone, let alone athletes, struggle to manage money boils him to his core. So, he is doing something about it. Knowing that the average playing career in the NFL is less than four years, Ogunleye’s “light bulb” moment came in his second year in the […] 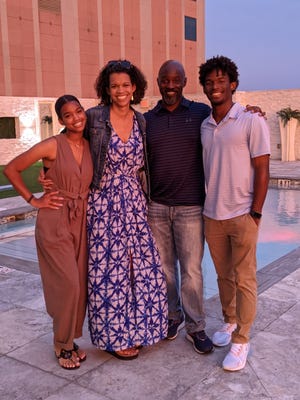